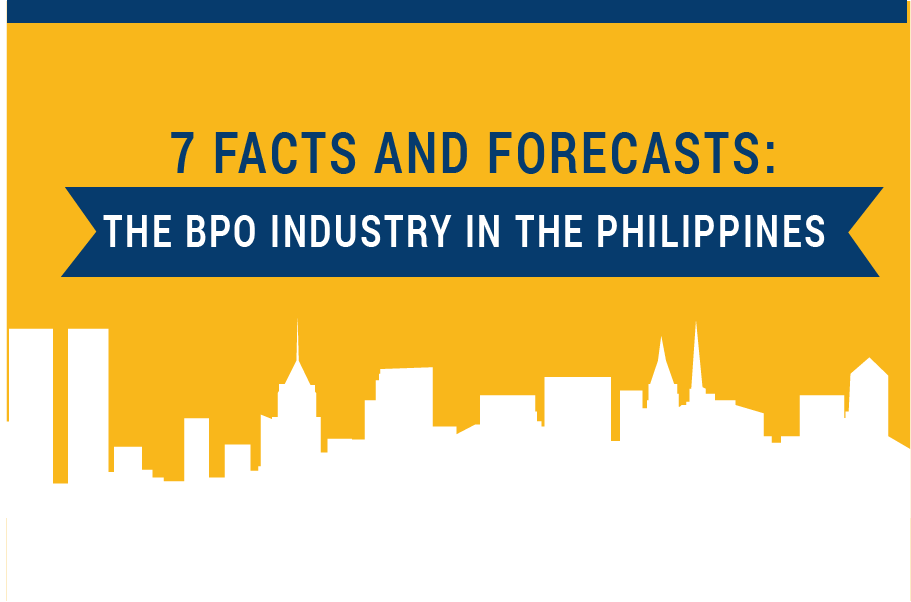 7 Facts and Forecasts: The BPO Industry in the Philippines

The Philippines’ Business Process Outsourcing (BPO) industry has ‘edged out India’* as the call center leader of the world. BPO is now the biggest contributor to the Philippines’ gross domestic product. We give you fast facts and numbers about it here.

Millions of Filipinos work in the Middle East’s petroleum-exporting nations, but remittances and work has decelerated since the steep decline in fuel prices. Now Filipinos need only upgrade their skills and find work in the local outsourcing sector instead of doing menial labor abroad.

US-based and European companies, in the current fluctuating economy, largely outsource to the Philippines to cut costs AND remain competitive.

1. In the world’s offshoring destinations, the Philippines is second only to India’s pioneering BPO industry. But in the voice or call center sub-sector, we have already surpassed India as global leader since 2010.

3. Industry experts predict the industry revenue to reach $25 billion by 2016, and $55 billion by 2020. The IT and Business Process Association of the Philippines (IBPAP) has a more modest projection of $21.3 billion revenue for 2016.

4. Over a million are already employed in the BPO industry, and 1.18 million more jobs are expected to be generated by next year.

5. BPO revenue is almost equal to the revenue from remittances coming from overseas Filipino workers.The local BPO industry is now the biggest contributor to the Philippines’ gross domestic product. The Philippine Stock Exchange and the Bangko Sentral ng Pilipinas (BSP) “have stated on record that outsourcing will soon overtake the value of remittances from overseas Filipino workers (OFWs) currently estimated at 10% of annual GDP.”

6. The Philippines has become the top destination for IT-BPO firms, and remains that way.
Several factors for the country’s success in BPO are:

In 2002, the then Department of Trade and Industry Secretary Mar Roxas lobbied in congress to revise Republic Act 7916. Buildings or floors in buildings could register as an ecozone. The budding BPO industries were exempt from paying national and local taxes, and only had to contribute 5% of their gross income as tax.

Telstra Chief Executive Officer David Thodey was in the country in April 2015, to inaugurate the company’s 14th contact center facility in the Philippines. He was quoted: “When we first came here, we were attracted by the country’s desire to build the BPO market, the great personality and character of the Filipino people, the culture, and willingness to work. We’ve seen a real change in the last three years. We’re now getting real thought leadership from the teams here in terms of best practices.”

7. 77% of the Philippines’ BPO export is for US-based companies. The remaining 23% is shared largely by Asia-Pacific.
The IBPAP aims to craft a new road map for the industry beyond 2016, setting new goals and strategies to secure the leadership of the Philippine IT-BPO industry in the global offshoring space. According to IBPAP Chair Danilo Reyes, the new road map covers 2016 through 2022.

According to BSP Deputy Governor Diwa Guinigundo, BPOs tend to grow regardless of economic conditions. In an interview with the Contact Center Association of the Philippines (CCAP), he noted the following:

The BPO industry is also locally dubbed “the sunshine industry”, and for good reason.

Now the age of the digital economy has arrived, and more and more skilled freelancers and virtual assistants are contributing to the outsourcing industry.

Leading BPO Companies in the Philippines