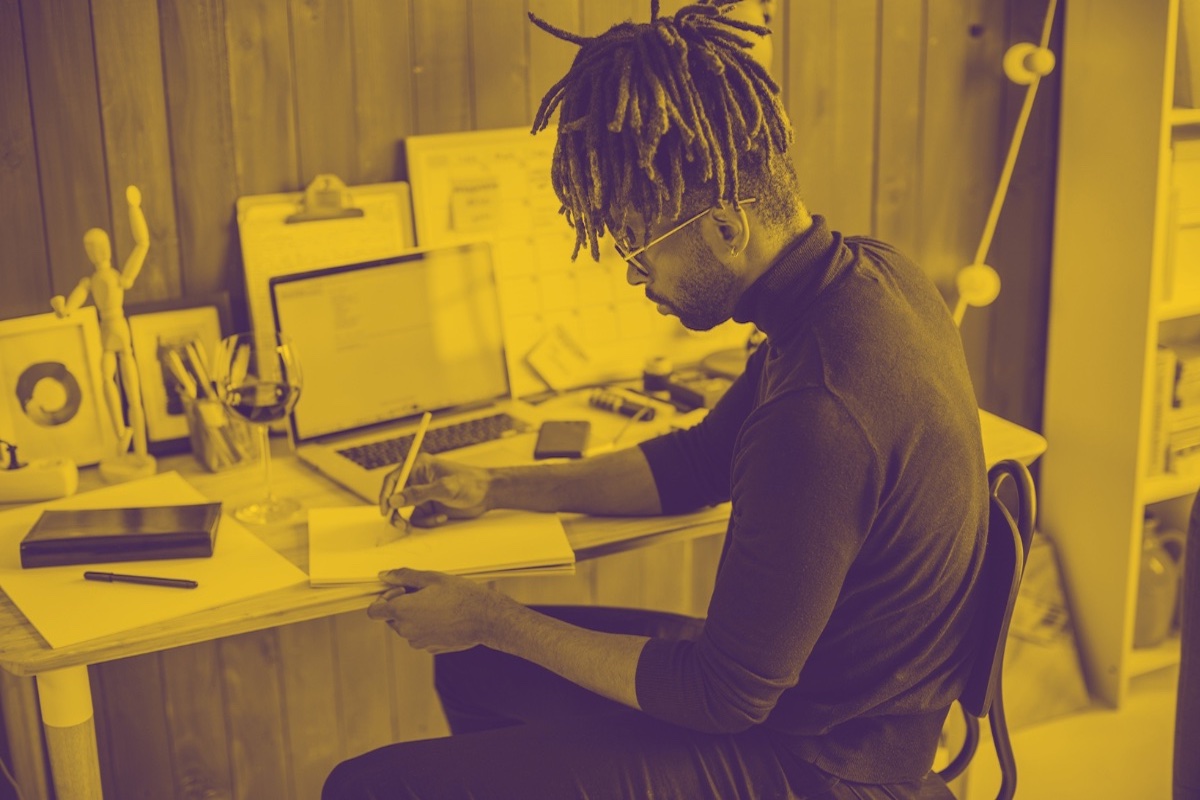 Remote Revolution: Rates of BPO, Freelancers and VAs in the PH

Business process outsourcing (BPO) now has the biggest workforce in the Philippines. Freelancing just added more to the income growth. Here we give you insider numbers on the rates.

In our last article, we covered The Seven Facts and Forecasts of the BPO Industry and how it continues to grow by leaps and bounds in the country.

Alongside BPO, there’s the remote revolution worldwide and especially among Filipinos. It’s just as much a part of outsourcing as BPO is.

While bigger companies in the US, Europe, and Asia have whole floors of employees working for them in the Philippines, small to medium businesses have one, two, or a whole team of virtual staff working at home or in an office.

Virtual assistants in vast categories of skills now number in the millions in the country. 1.5 million Filipino freelancers are contributing to the Philippines’ gig economy. They are internationally employed Filipinos engaging in creative works and customer service.

In 2022, Filipino freelancers’ income amounted to 57% more money per hour and this figure can only rise after the global pandemic.

More than 1.56 million of the 3.38 billion global workforce are freelancers. Most of them have a bachelor’s degree. And postgraduate freelancers are paid more for their expertise.

According to Payoneer’s report:

32% of freelancers have reported high demand for their services since the pandemic began and 45% of them think that the demand is likely to continue growing. Female participation also increased from 24% to 29% in the last two years.

The most popular fields are not necessarily the ones providing the highest pay, although they do pay well. In this order: 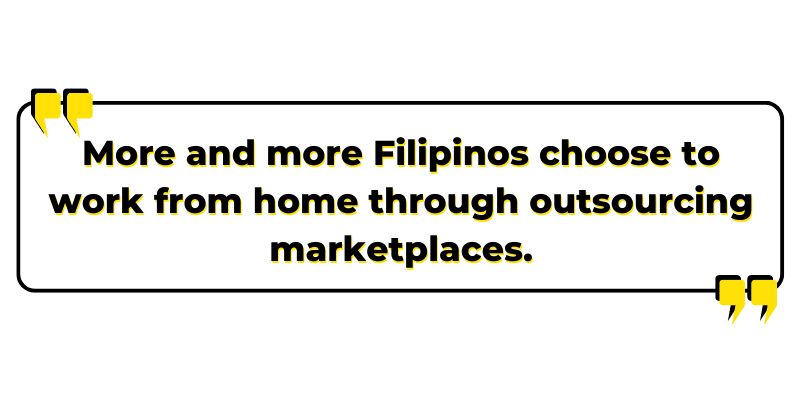 The Philippines have a high level of enthusiasm for fully remote work. 49% prefer working fully remotely and some of them prefer hybrid working arrangements.

It’s convenient and cost-efficient. The daily commute in and around the major cities and even provinces is horrendous. The transport inflation rises by 24.6% because of the continued hike in oil prices. With the threat to health during and post-pandemic, daily commuters also decreased, which pushed the transport groups to increase the fare.

Freelancers don’t need that. Their daily commute usually involves bed to breakfast to the desk, and often, breakfast and all other meals are taken at the desk.

The rates are better. “If you get a freelance job five days a week the remuneration could be higher than most people with the regular job”, says Upwork Country Manager Ron Cirujano. And it’s true.

Plenty of freelancers earn more than those who have ‘steady’ jobs. For freelancers, contracts do come and go as projects end, but when you keep your client satisfaction high, more assignments and more invitations soon arrive from repeat clients and new ones.

Healthier work-life balance. They are self-managed. They have more work than clocking in and out at the office but freelancers can wake up on their own time, set their working schedule, and work anywhere.

They are free to choose their clients, prioritize their personal needs, and work anywhere. They designate their workplace and personalize it for motivation, increasing their efficiency.

Helps grow careers. Freelancers work for their name. They focus on upskilling and upgrading their existing skills to land clients. They also work for the chance to work with other professionals from startups to large corporations.

It’s flexible. One freelancer could be a writer for a week and dabble in web design the next week if she’s got the skills for it.

It’s not fickle. It’s flexible. Freelancers specialize but do not box themselves into roles. They can explore and grow without hindrance, and earn more money as they make themselves more and more valuable in more and more fields.

The big question most entrepreneurs have about hiring virtual assistants and freelancers is: how much does it cost?

BPO companies provide allowances for transportation, clothes, and food. For freelancers, it’s all-inclusive, and if you hire via Upwork, rates, and quotes usually include Upwork’s 5-20% commission.

The Philippines’ salaries differ based on factors like years of experience and current position, and industry and market differences. Night shift differential increases employee rate by 7.5% for working between 3pm-11pm. And there’s a 10% night differential for graveyard shifts that fall between 10pm-5am.

The country has wage orders depending on the location. Cities have higher wages than provinces. A call center agent’s average salary in the Philippines is Php 169 per hour while entry-level positions range from Php 80-120 depending on their location.

The following are the average hourly rate and distribution of freelancers by industry according to the Department of Labor and Employment (DOLE). 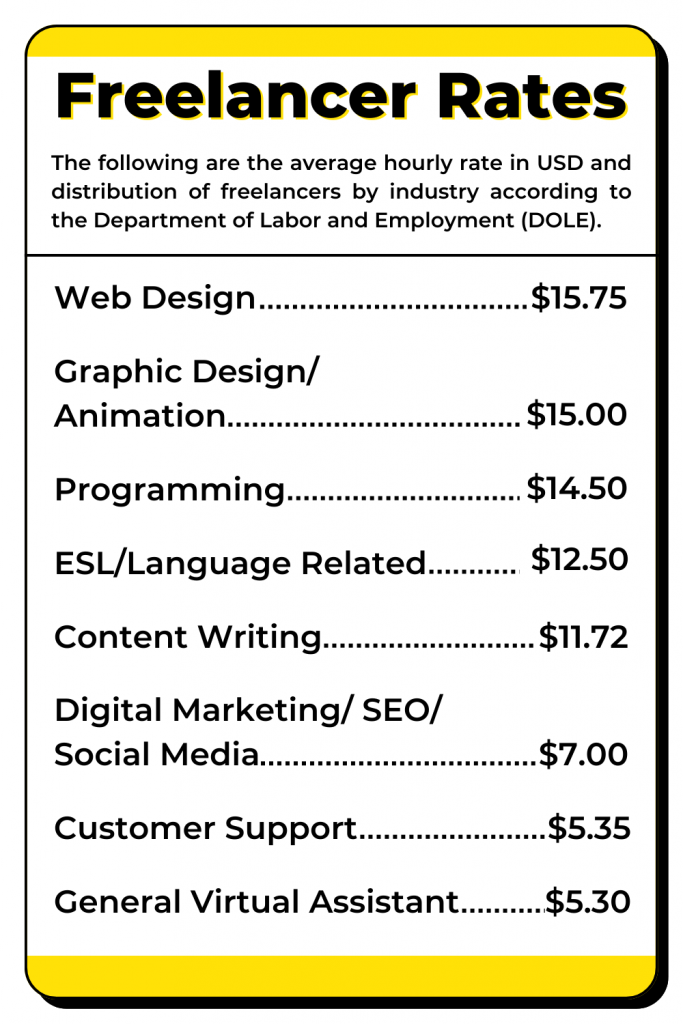 The Philippines is keeping up with the necessary technological tools to directly connect with international clients. The country’s outsourcing industry became more than contact centers and customer service. Filipinos picked up skills and expertise for digital making it a home for service providers that can streamline your business today.